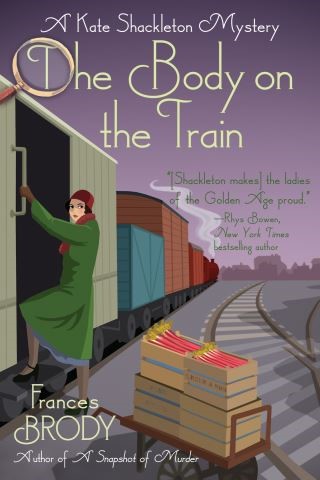 The Body on the Train

And it's up to Kate to derail the killer.

London, 1929. In the darkness before dawn, a railway porter, unloading a special train from Yorkshire, discovers a man's body, shot and placed in a sack. There are no means of identification to be found and as Scotland Yard hits a dead end, they call on the inimitable Kate Shackleton, a local sleuth, confident her local knowledge and investigative skills will produce results. But it's no easy task.

Suspicion of political intrigue and fears of unrest in the Yorkshire coalfields, impose secrecy on her already difficult task. The murder of a shopkeeper, around the same time, seems too much of a coincidence. The convicted felon was found with blood on his hands, but it's too tidy and Kate becomes convinced the police have the wrong man.

By then it's too late. Kate finds herself in a den of vipers. The real killer is still at large, and having tinkered with Kate's car, nearly causes her to crash. Not only that, but Scotland Yard has turned their back on her. As Kate edges toward the shocking truth, she's going to need all the strength and resourcefulness she can muster to uncover this sinister web of deceit.

Frances Brody: Frances Brody lives in Leeds where she was born and grew up. After leaving school at 16, she worked and traveled, including a spell in New York. She then won a place at Ruskin College, Oxford, and afterwards studied at York University. Before creating the Kate Shackleton mysteries, Frances wrote historical sagas, winning the HarperCollins Elizabeth Elgin award for most regionally evocative debut saga of the millennium. When not writing or reading, Frances likes to test her less than brilliant map reading skills by walking in the Yorkshire Dales.