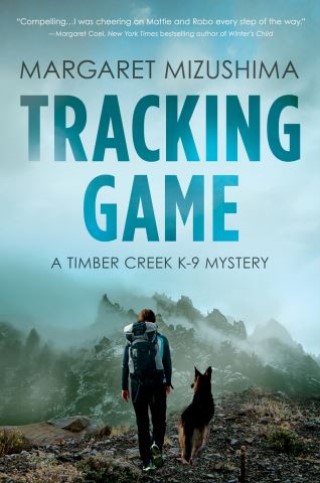 Two brutal murders, a menacing band of poachers, and a fearsome creature on the loose in the mountains plunge Mattie Cobb and her K-9 partner Robo into a sinister vortex.

An explosion outside a community dance sends Mattie Cobb and Cole Walker reeling into the night, where they discover a burning van and beside it the body of outfitter Nate Fletcher. But the explosion didn't kill Nate--it was two gunshots to the heart.

The investigation leads them to the home of rancher Doyle Redman, whose daughter is Nate's widow, and the object of one of their suspect's affection. But before they can make an arrest, they receive an emergency call from a man who's been shot in the mountains. Mattie and Robo rush to the scene, only to be confronted by the ominous growl of a wild predator.

As new players emerge on the scene, Mattie begins to understand the true danger that's enveloping Timber Creek. They journey into the cold, misty mountains to track the animal--but discover something even more deadly in Tracking Game, the fifth installment in Margaret Mizushima's Timber Creek K-9 mysteries.

Margaret Mizushima: Margaret Mizushima is the author of the critically acclaimed Timber Creek K-9 mysteries. Her first novel, Killing Trail, was named Debut Mystery of the Month by Library Journal and was an RT Reviewers' Choice Award nominee. She balances writing with assisting her husband with their veterinary clinic and Angus cattle herd. They live on a small ranch in Colorado where they raised two daughters and a multitude of animals. This is her fifth mystery.