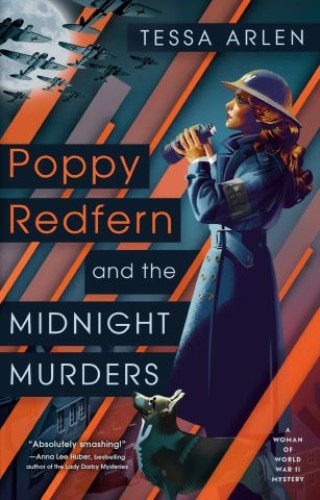 Poppy Redfern and the Midnight Murders

Summer 1942. The world has been at war for three long and desperate years. In the remote English village of Little Buffenden, Poppy Redfern’s family house and farmland has been requisitioned by the War Office as a new airfield for the American Air Force. As the village's Air Raid Warden, Poppy spends her nights patrolling the village as she tries to ease her neighbors’ fears about the “Friendly Invasion” and what it means to their quiet way of life.

When two young, popular women who were dating American servicemen are found strangled, Poppy quickly realizes that her little town has been divided by murder. The mistrust and suspicion of their new American partners in war threatens to tear Little Buffenden apart. Poppy decides to start her own investigation with the help of a charismatic American pilot and she soon unearths some chilling secrets and long-held grudges. Poppy will have no choice but to lay a trap for a killer so perilously close to home, she might very well become the next victim....

Tessa Arlen: Tessa Arlen was born in Singapore, the daughter of a British diplomat; she has lived in Egypt, Germany, the Persian Gulf, China, and India. An Englishwoman married to an American, Tessa lives on the West Coast with her family and two corgis.