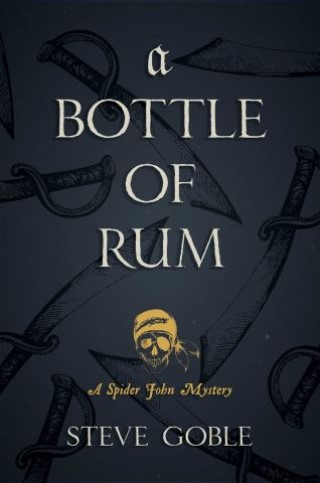 A Bottle of Rum

August, 1723 -- Spider John Rush believes he has escaped piracy forever. Enjoying rum and chess in a dark Lymington tavern, he dreams of finding passage to Nantucket to reunite with his beloved Em and to finally get to know the son he remembers only as a babe in arms, though the lad must be dreaming of going to sea himself by now. But when a lazy taverner is stabbed to death, one glance at the victim tells Spider the pirate life has followed him ashore and he cannot possibly ignore this bloody crime. The wise maneuver would be to run before authorities arrive, but Spider is denied that choice because he’s already deeply, connected to the crime—he fashioned the murder weapon with his own hands.

The knife was a gift to a young man, one who ran off with the notorious Anne Bonny before Spider could drag him into a respectable life.

Soon, Spider John and his ancient shipmate Odin are dodging accusations and battling smugglers on a trail that leads to a madhouse where patients are dying one by one. Spider finds himself tangling with a horribly maimed former shipmate, vengeful pirates, a gun-wielding brunette, a death-obsessed young woman, a sneaky farmhand and a philosopher engaged in frightening experiments. But death seems to be winning at Pryor Pond, and the next life lost may be the one Spider desperately wants to save.

Spider must brave sharp steel, musket balls, gunpowder bombs, dangerous women and gruesome surgery if he is to find his foolish young friend alive and try once again to put piracy in their past.