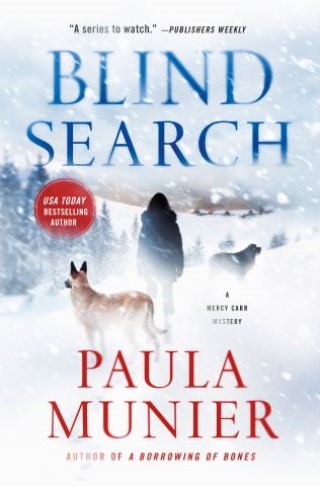 Former Army MP Mercy Carr and her retired bomb-sniffing dog Elvis are back in Blind Search, the sequel to the page-turning, critically acclaimed A Borrowing of Bones

It’s October, hunting season in the Green Mountains—and the Vermont wilderness has never been more beautiful or more dangerous. Especially for nine-year-old Henry, who’s lost in the woods. Again. Only this time he sees something terrible. When a young woman is found shot through the heart with a fatal arrow, Mercy thinks that something is murder. But Henry, a math genius whose autism often silences him when he should speak up most, is not talking.

Now there’s a murderer hiding among the hunters in the forest—and Mercy and Elvis must team up with their crime-solving friends, game warden Troy Warner and search-and-rescue dog Susie Bear, to find the killer—before the killer finds Henry. When an early season blizzard hits the mountains, cutting them off from the rest of the world, the race is on to solve the crime, apprehend the murderer, and keep the boy safe until the snowplows get through.

Inspired by the true search-and-rescue case of an autistic boy who got lost in the Vermont wilderness, Paula Munier's mystery is a compelling roller coaster ride through the worst of winter—and human nature.

Paula Munier is the USA TODAY bestselling author of the Mercy Carr mysteries, inspired by the hero working dogs of Mission K9 Rescue, her own Newfoundland-retriever rescue Bear, and her lifelong passion for crime fiction. The first in the series, A Borrowing of Bones, was nominated for a Mary Higgins Clark Award.

She’s also the author of three popular books on writing, Plot Perfect, The Writer’s Guide to Beginnings, and Writing with Quiet Hands, as well as Happier Every Day: Simple ways to bring more peace, contentment and joy into your life and the acclaimed memoir Fixing Freddie: The true story of a boy, a mom, and a very, very bad beagle. She lives in New England with her family, rescue dogs Bear and Bliss, and a rescue torbie tabby named Ursula.