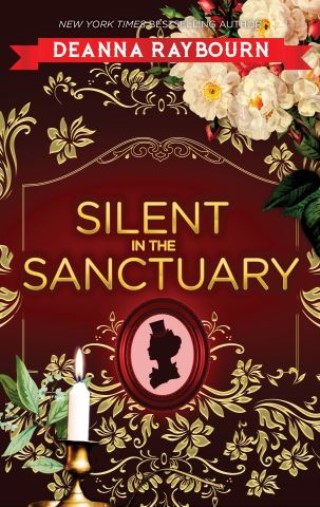 Silent in the Sanctuary

Join Lady Julia Grey on her next investigation in book 2 of the acclaimed historical mystery series only from New York Times bestselling author Deanna Raybourn.

Fresh from a six-month sojourn in Italy, Lady Julia returns home to Sussex to find her father’s estate crowded with family and friends. Much to her surprise, the one man she had hoped to forget—the enigmatic and compelling Nicholas Brisbane—is among her father’s houseguests…and he is not alone. Not to be outdone, Julia shows him that two can play at flirtation and promptly introduces him to her devoted, younger, titled Italian count.

But the homecoming celebrations quickly take a ghastly turn when one of the guests is found brutally murdered in the chapel. Lady Julia resumes her unlikely and deliciously intriguing partnership with Nicholas Brisbane, setting out to unravel a tangle of deceit before the killer can strike again.

Deanna Raybourn: New York Times bestselling author Deanna Raybourn graduated from the University of Texas at San Antonio with a double major in English and history and an emphasis on Shakespearean studies. She taught high school English for three years in San Antonio before leaving education to pursue a career as a novelist. Deanna makes her home in Virginia, where she lives with her husband and daughter and is hard at work on her next novel.